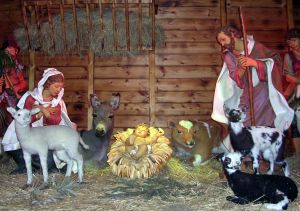 I just finished watching a video on youtube of some kind of flash mob doing Christmas caroling at a mall.  Amazing voices, surprised smiles, and spontaneous involvement by onlookers there, along with the requisite number of people filming the whole thing on their phones as it happened.  (Ah, the joys of modern technology. 😉 )

One thing really stood out to me though.  At one point toward the end of the video, a couple dressed as Mary and Joseph come out with a baby.  The song being sung is “O Holy Night”, which includes a line calling people to, “fall on your knees…”

At around 4:42 in the video, you see a kid’s face as he catches sight of the stand-ins for the Holy Family.  His eyes widen, his jaw drops, and he does indeed fall to his knees.

I wonder what was going through his mind.  He is old enough to know that this isn’t the real Mary, Joseph, and baby Jesus walking through the mall.  And yet, for some reason, he kneels at the sight of them.

I wonder, if I saw Jesus when He was an infant…would I be kneeling?  Would I be able to see past the apparent helplessness of a baby and recognize the supreme power, but more than that, the supreme love inside that small frame?  It really is all speculation, since I lack the power to time-travel back to 1st century Judea.

“Have this attitude in yourselves which was also in Christ Jesus, who, although He existed in the form of God, did not regard equality with God a thing to be grasped, but emptied Himself, taking the form of a bond-servant, and being made in the likeness of men. Being found in appearance as a man, He humbled Himself by becoming obedient to the point of death, even death on a cross. For this reason also, God highly exalted Him, and bestowed on Him the name which is above every name, so that at the name of Jesus EVERY KNEE WILL BOW, of those who are in heaven and on earth and under the earth, and that every tongue will confess that Jesus Christ is Lord, to the glory of God the Father.” Philippians 2:5-11 NASB

The “old, familiar story” of Christmas.  Some thought it ended on the Cross.  They were wrong.  He still lives, and His story will never end.

So back to the kid in the video.  I don’t know what was going through his young mind when he knelt.  But I pray that whenever I catch even a glimpse of Jesus close to me, I will have the willingness to do likewise.